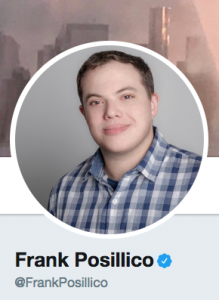 Frank Posillico, a videographer at The New York Daily News for the past five years, visited Prof. Jon Friedman’s News Literacy in a Digital Age classroom in November and imparted some career advice for the members of the class.

“Stress your problem-solving ability” in job interviews, advised Posillico, who is in his late 20s. Anyone can tell a job interviewer that they work hard, for example, but the applicants who have the sophistication and presence of mind to stress their ability to think on their feet, be innovative and act like team players, all rolled into one comment, are bound to be way ahead of the curve.

Posillico also pointed out that Hunter students and alumni — tech-savvy, wise in the ways of New York City and eager to make their marks — are the kinds of young people that the Daily News and other local media businesses want to hire. He suggested that the students monitor such websites as Mediabistro, which is where he learned of the Daily News opening.

Posillico also described his search in his own work  for “great” stories, which he defined as character-driven videos lasting up to, say, 10 minutes — mini-documentaries, really — that show a slice of life that is unexpected.

For example, not long ago, he worked on a piece about a “farm” on a roof in Long Island City — yes, the same community where Amazon has pledged to offer 50,000 jobs in its new installation. The juxtaposition of a swinging new-media stronghold and a farm was not lost on the students, who nodded in recognition about hearing an interesting story idea happening right under their noses.