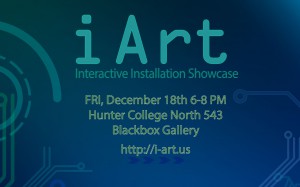 iArt Show features work created by the undergraduate and graduate students in the Interactive Installation course.

END_OF_DOCUMENT_TOKEN_TO_BE_REPLACED

Film synopsis: “Art and science collide as a young actor with cerebral palsy and a dancer embark on a journey that leads to unprecedented physical transformation and challenges the limitations associated with disability.”

Enter The Faun is part of the official line up at Dance on Camera next year!

Enter the Faun reviews: The Hollywood Reporter and Film Society of Lincoln Center.