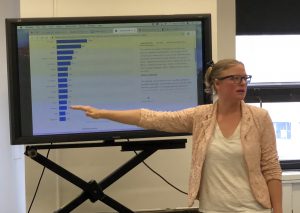 WNBC Web Editor Coralie Carlson told Prof. Sissel McCarthy’s news video students to boost their engagement on social media during her guest lecture last week. She said posting on Facebook is a must given its 2.2 billion users worldwide. “It’s the big gorilla in the room,” said Carlson, adding that YouTube is a close second. Twitter has 335 million users, but since journalists use this platform to break news and promote their stories, she thinks students should also be active there and posting three times a day.
Other top takeaways from her talk include:
END_OF_DOCUMENT_TOKEN_TO_BE_REPLACED