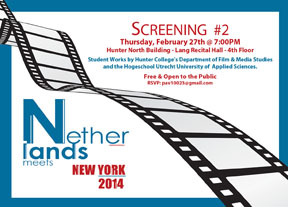 Sixteen students from a top-ranked university in the Netherlands will hone their skills in media arts during an 14-day program at Hunter College, sponsored by the Department of Film and Media Studies. The students will be led by John Driedonks, and Hunter graduate Brian Maston, who earned a Hunter BA in Film (2003) and now teaches as a senior lecturer in Film and Media Studies at the Hogeschool Utrecht—the Utrecht University of Applied Sciences.

The sixteen students, who will be at Hunter from February 15-28, will attend journalism and film/video production courses taught by faculty at Hunter College and the CUNY “J” School. They will produce documentary shorts or video news stories that will be screened along with student work from the Hunter College Department of Film and Media Studies.

IMA students Jay Weichun and Natalie Conn’s film A Place of Spirit will be part of the Black Maria Festival Tour. The students will be attending the screening on March 1st, 2:00PM at the Madison Arts and Cultural Alliance Public Library where the tour will be currently taking place. More dates and locations of the Black Maria Festival Tour is listed on their website.

The event will be held at NYU Arthur Carter Journalism Institute, 20 Cooper Square, on Wednesday February 26th at 7:00PM