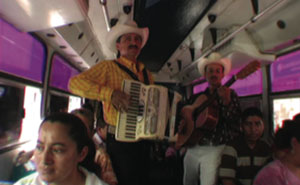 Visiting artist Natalia Almada will give a presentation of her work, an event that is free and open to the public. Almada’s directing credits include All Water Has a Perfect Memory, an experimental short film that received international recognition; Al Otro Lado, her award winning debut feature documentary about immigration, drug trafficking and corrido music; and her most recent film, EL GENERAL is a family memoir and portrait of Mexico past and present. Almada’s work has screened at The Sundance Film Festival, The Museum of Modern Art, The Guggenheim Museum, The Whitney Biennial, INPUT, and at The Flaherty Seminar, as well as at several film festivals around the world, universities, conferences and as television broadcasts including PBS, ARTE, and VPRO. She has received support for her work from numerous
foundations including The Creative Capital Foundation, The Tribeca Film Institute, The Sundance Institute Documentary Film Program, PBS and others. Almada is a MacDowell Colony Fellow and a 2008 Guggenheim Fellow. She graduated with a Masters in Fine Arts in photography from the Rhode Island School of Design and shares her time between Mexico City and Brooklyn, New York.