Upcoming spotlight series on Politics, Policy and the Arts co-presented by Arts Across the Curriculum, Roosevelt House, and co-produced by the F&M Department. The series kicks off with a panel on War & Witnessing in the Lunch will be provided. Please RSVP to ppa@roosevelthouse.hunter.cuny.edu. 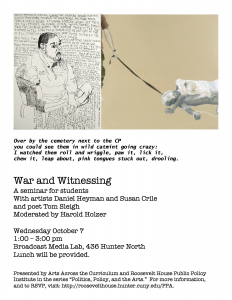 The series Keynote is next week – a conversation between artist Tania Bruguera and visual artist (and Hunter professor) Paul Ramirez Jonas – to be held on Friday, October 9th from 6 – 8 PM at Roosevelt House.