The REEL DIALOGUE series begins the Fall 2011 season with a screening of THE ANIMAL IN YOU and conversation with filmmaker Mariano Wainsztein and renowned countertenor, Andreas Scholl, the subject of the film.

THE ANIMAL IN YOU recently received the prestigious National Board of Review of Motion Pictures Award. The film tells the intimate story of Andreas Scholl and his beloved influential teacher, Richard Levitt, and captures their unique relationship. Richard Levitt grew up in Los Angeles before pursuing a career as a classical singer and teacher in Europe where he first met Andreas Scholl. Fanfare Magazine writes, “There are more excellent countertenors before the public today than ever before, but one stands out above all others, as Caruso among tenors a century ago: Andreas Scholl.”

Filmed in Basel, Switzerland and Kiedrich, Germany, the film’s soundtrack includes live recordings of Scholl collaborating with other world-class musicians and interviews about Levitt’s life and his unique approach to singing and teaching. Three central scenes observe both Levitt and Scholl in a shared master class at the music academy, as they instruct three young singers. The film moves back and forth between these scenes, ignoring the dictates of a chronological linearity, and resembling the structure of a musical piece.

THE ANIMAL IN YOU is co-produced and directed by Mariano Wainsztein, a recent graduate of Hunter’s Integrated Media Arts (IMA) MFA graduate studies program. Born in Buenos Aires and raised both in Argentina and Israel, Mariano studied music in the Tel Aviv Academy of Music and in the Royal conservatory in The Hague, Holland, majoring in composition. Mariano has written music for dance companies such as the Bat-Sheva ensemble, and the choreographer Emanuel Gat. He resides and has worked in New York since 1999, when he received a grant from the Franklin Furnace Archive for Performance Art and the New York State Council on the Arts, to compose and perform a piece at The Kitchen Theater in New York. 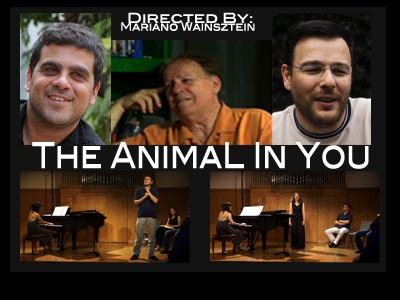 The REEL DIALOGUE series is free and open to the public.
For more information contact:
David Pavlosky
212.772.4953