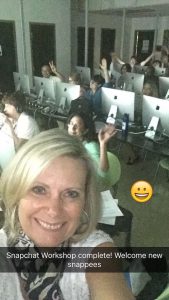 Distinguished Lecturer Sissel McCarthy was selected as a 2016 Dow Jones News Fund Fellow and invited to attend a week-long training academy at the University of Texas at El Paso in May to learn the latest multimedia reporting and production techniques. While there, she taught a workshop on how to use Snapchat as news platform and produced a multimedia story on the influx of Cuban refugees crossing into the United States at El Paso that was published in the Miami Herald.

She was also invited by the International Communication Association (ICA), an academic association of more than 4,500 communication scholars around the world, to present her work on public scholarship in a talk called “Communicating with Power” at its annual conference this year in in Fukuoka, Japan.