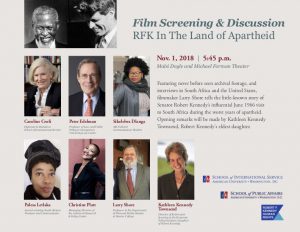 Prof. Larry Shore will be screening his film RFK In The Land of Apartheid followed by a discussion.

Featuring never before seen archival footage, and interviews in South Africa and the United States,filmmaker Larry Shore tells the little-known story of Senator Robert Kennedy’s influential June 1966 visit to South Africa during the worst years of apartheid.
Opening remarks will be made by Kathleen Kennedy Townsend, Robert Kennedy’s eldest daughter.