[flv:RippleofhopeLQ.flv rfk_thumb.jpg 480 360]
Larry Shore and Tami Gold are pleased to announce the official
release of the film: RFK In The Land of Apartheid: A Ripple of Hope
In association with the Vermont International Film Festival 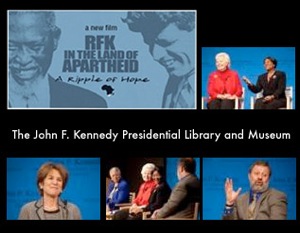 Coordinated with the release of the film is the new website: www.rfksafilm.org. The site is particularly designed to be used in university classes and high schools.