The Grassroots Justice Films Series is part of the cultural project of the National Mobilization Against SweatShops (NMASS). NMASS is a membership organization of working people from many different industries and communities coming together to organize for control of their lives. This Saturday night’s screening of REZONING HARLEM will be followed by a panel discussion on the future of community centered planing in NYC. 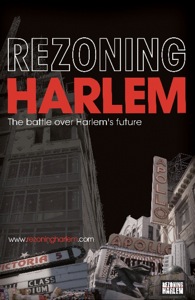 REZONING HARLEM follows longtime members of the Harlem community as they fight a 2008 rezoning that threatens to erase the history and culture of their legendary neighborhood and replace it with luxury housing, offices, and big-box retail. A shocking expose of how a group of ordinary citizens, who are passionate about the future of one of the city’s most treasured neighborhoods, are systematically shut out of the city’s decision-making process, revealing New York City’s broken public review system and provoking discussion on what we can do about it.