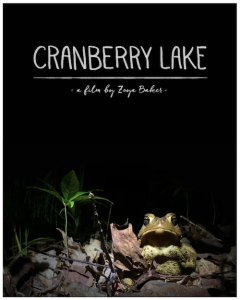 The National Board of Review just announced they awarded Integrated Media Arts student Zoya Baker a $5,000 grant for her film Cranberry Lake, a documentary about forest ecology students at a remote research station in the Adirondacks. Cranberry Lake was edited in professor Michael Gitlin’s editing class as part of Zoya’s collaborative residency project with professor Andrew Lund.

Founded in 1909, the National Board of Review has dedicated its efforts to the support of film, domestic and foreign, as both art and entertainment, celebrating the distinctive voice of the individual artist, honoring excellence and supporting freedom of expression in film. The Board’s core activities include fostering commentary on all aspects of film production, as well as underwriting educational film programs and seminars for film students.