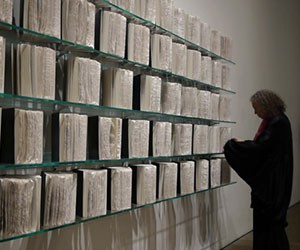 This intimate film portrait explores how one Jewish Orthodox woman became a contemporary feminist artist. Aylon’s life literally transforms, due to several factors, not the least of which was the feminist movement of the seventies. Still an active artist today at 84, Helène Aylon was raised in Borough Park, Brooklyn, a traditional Orthodox Jewish community