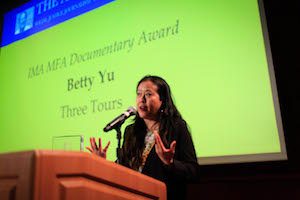 Congrats to IMA alumna Betty Yu for her film THREE TOURS!  She is the 2017 Aronson IMA Documentary Winner!

THREE TOURS, produced and directed by Betty Yu, is a documentary that captures the lives of three U.S. military veterans, Nicole Goodwin, Ramon Mejia and Ryan Holleran, as they work to heal their wounds and battle with PTSD resulting from their deployments in Iraq. The film follows their transformation from U.S. military trained soldiers to agents of change advocating for proper mental health treatment of veterans and an end to unjust wars.

Betty Yu graduated from the IMA MFA Hunter College program in 2016. She is a Chinese-American interdisciplinary, multi-media artist, educator and community activist. Her documentary and multi-media work is shaped and influenced by her direct experience as a daughter raised by garment worker parents who toiled in sweatshops after arriving from Hong Kong over 37 years ago. This upbringing undoubtedly frames who she is as an artist today. In her artwork she approaches social issues through personal story, family narrative and community history. Her work explores issues ranging from labor rights, immigrant justice, and gender equity to militarism 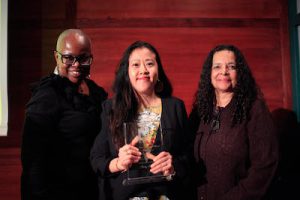