Come see IMA alum Grayson Earle’s installation, POEMECIA (Project Website). The instillation will be at the Thomas Hunter Project Space, located in the basement of the Thomas Hunter Building (930 Lexington Ave), August 26th – September 16th 2016. Visitors will need to get a “guest pass” from the main entrance at Hunter College on the corner of 68th St. and Lexington Ave. http://www.hunter.cuny.edu/visitorscenter/68th-street-campus-map 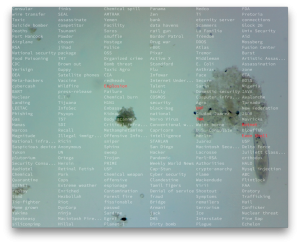 “In 2014 I traveled to Bluffdale, Utah during an art residency in a nearby town. There, I visited the NSA Data Center to simply behold it with my own eyes. As Arendt could have predicted, the cluster of buildings were drab and scarcely visible from the perimeter fence adjacent to the highway. I gathered some ground samples to put under my digital microscope upon returning to New York City.

With the help of the Bio Base in Lower Manhattan, I was able to isolate microbial organisms from the sample and allow them to multiply in designated containers. From my work on the NSA Game, I was aware of the list of sensitive search terms that the NSA and DHS use to monitor our online movements. I combined the list of terms with the view from the digital microscope and a computer vision technique which detects movement within live video. When the microbes swim by a term, it becomes ‘activated.’ When enough terms have been activated, a haiku is formed and live tweeted. In this way, the microbes themselves act as subversive agents, saturating the Internet with sensitive search terms and jamming the surveillance apparatus.”

Earle (b. 1987) lives and works in Brooklyn, NY. He teaches at Hunter College, split between the Computer Science, Film and Media, Integrated Media Arts, and Studio Art MFA programs. This interdisciplinary posture is emblematic to his work as an artist, and is an approach he proselytizes in his courses on game programming, electronics, and generative art.

Recent displays of his work include SeoulArts in South Korea; Eastern Bloc and Centre Phi in Montreal; the Brooklyn Museum, Macy Gallery, and Babycastles in New York City; and the Media Arts Festival in Tokyo. He has published essays on the socioeconomic implications of the Cold War on abstract expressionism in the United States and Russia, as well as new methods for rhetorical approaches in video games.