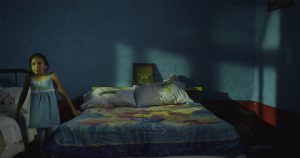 IMA student group, Eyespeak will be welcoming renowned filmmaker Nicolás Pereda to screen The Palace at Hunter College (North Building – Room 502) on Wednesday, March 22nd, at 6:30PM. Nicolás will be in attendance for a Q&A and a conversation about his work after the screening.

Nicolás uses elements and techniques from non-fiction and narrative films to touch upon daily life, society, and relationships of power. The conversation will explore the filmmaker’s collaboration with non professional actors, and the relationship between performance and representation.

Free and open to the public but please RSVP.

The Palace follows the everyday life of seventeen women who live together in a large house for financial and emotional reasons. They help each other with their daily chores and train themselves for various trades in order to obtain a job. The majority of these women will become nannies, domestic workers and private nurses for senior patients.

Nicolás Pereda is a filmmaker whose work explores the everyday through fractured and elliptical narratives using fiction and documentary tools. His films have been exhibited in festivals around the world like Cannes, Berlin, Venice, Locarno, Rotterdam, Toronto, San Sebastian and New York Film Festivals and have been awarded over twenty-five international prizes. He has had more than twenty retrospectives in various festivals, cinematheques and archives around the world including Anthology Film Archives, Harvard Film Archive and the Jeonju International Film Festival.