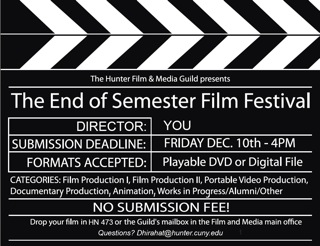 Hunter Student Film and Media Guild will be holding an End of Semester Film Festival and are now taking submissions until December 10th.
The event will be held on December 17th (Fri) at 7pm in the Lang Recital Hall.