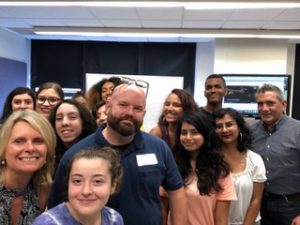 CNN producer and video journalist Jonathan O’Beirne shared his expertise, tips and enthusiasm with MEDPL 283 News Video Reporting students. O’Beirne produces videos for CNN’s Great Big Story and shared one of his stories about a teen born without a jaw that has more than 10 million views. O’Beirne critiqued b-roll students shot around campus and offered some useful tips including: END_OF_DOCUMENT_TOKEN_TO_BE_REPLACED

Prof. Larry Shore’s film RFK in the Land of Apartheid will be screening  on November 14th at: 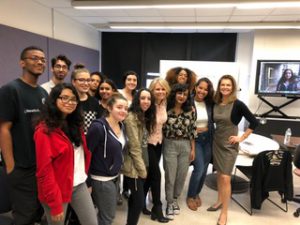 Former WNBC anchor Mary Civiello spent an afternoon with Professor McCarthy’s news video students, reviewing their first stand-ups. Civiello explained that stand-ups can provide a transition in the middle of a story or an ending that showcases a journalist’s on-the-scene reporting. Her top tip:  it’s what you say but also how you say it. Several times, she told students to think about what the words in their standup meant to them and to bump up their energy level as if they were speaking or reading to young children. She also advised anyone on camera to keep their arms bent at waist level so they could use their hands more naturally when speaking.