END_OF_DOCUMENT_TOKEN_TO_BE_REPLACED

Free workshop: “How to Get Your Films & Docs into Festivals” 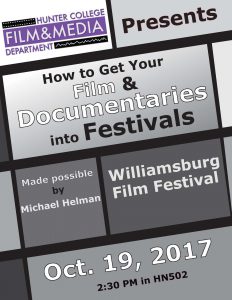 Join us for a free workshop:

How to Get Your Films & Documentaries into Festivals
Thursday, Oct. 19 at 2:30PM
Hunter North 502

IMA alumna Annie Berman’s 2015 film UTOPIA 1.0: Post-Neo-Futurist-Capitalism in 3D! will be exhibited at the RIXC Festival in Riga, Latvia. The twenty-minute film takes place at the abandoned virtual 3D world known as Second Life, where Berman sends her avatar in to investigate the decline of this utopian world.