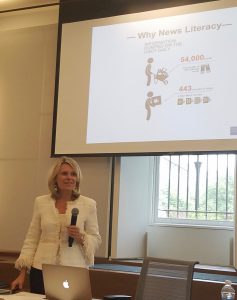 Distinguished Lecturer Sissel McCarthy shared her passion for news literacy education at Columbia University’s Tow Center during its annual Educator’s Symposium on September 19, 2017. This year’s theme was “From Fake News to AI: Teaching Journalism in Contentious Times.”  Professor McCarthy presented her work on teaching news literacy at the undergraduate level in a talk called “How to Spot Fake News and Stay News Literate”.

IMA alumna Jing Wang was interviewed about her recent projects on New York Lounge show on the Chinese-American network SinoVision.

Jing’s talked about her thesis film My name is Jing. The film explores personal memories to contextualize the impact of the rapid social and economical changes on the Chinese community over the past five decades. She also spoke about her contributions to the exhibition “Age of Empires: Chinese Art of the Qin and Hun Dynasties” held at the Metropolitan Museum of Art.