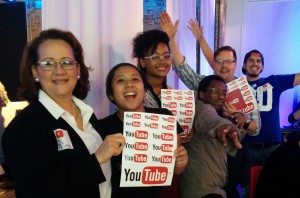 On October 1st, the Hunter College Film and Media Studies students, faculty and staff joined other colleges from the New York City area at the YouTube headquarters in Chelsea for a workshop on how to start a YouTube channel and leverage an online presence. YouTube’s Content Partnership Team and a panel of five media creators talked about the opportunities this platform has to offer, and shared their insider experiences and strategies used to develop their productions. Hunter’s enthusiasm and energy was felt all around the room and welcomed by the YouTube staff and the other participants.

Alumna Pam Sporn was interviewed by Stacy Parker Le Melle on Huffington Post on her views on Detroit. Growing up in Detroit she’s feels a deep connection to the city and questions when the city is featured in news or media, if it’s portrayed truthfully.

Concerned about the CUNY Budget Cuts and the possibility of yet another tuition increase, Jing Wang and George Morales (two of Professor Gold’s students) went to Albany with other CUNY students on March 15, 2011 to lobby in support of public higher education. Here is their story.