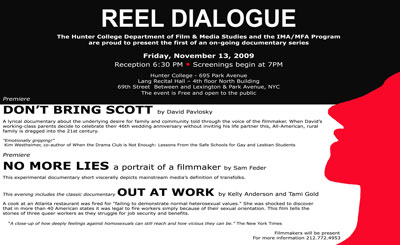 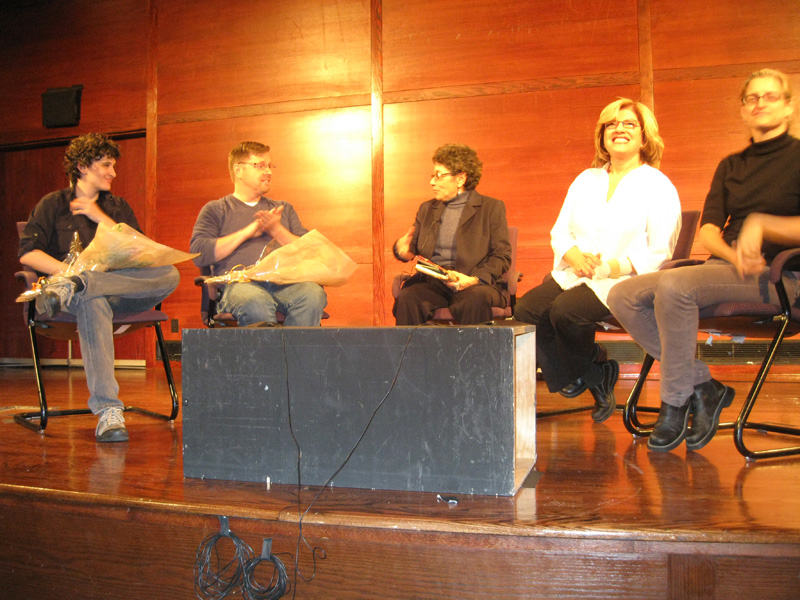 Update: The launch of REEL DIALOGUE has been picked up by The Village Voice and Time Out New York among others.We hope you can join us tonight — it will be a great event Reception begins at 6:30 PM • Screenings begin at 7PM Hunter College – 695 Park Avenue Lang Recital Hall – 4th floor North Building

The event is Free and open to the public

Premiere
DON’T BRING SCOTT by David Pavlosky
A lyrical documentary about the underlying desire for family and community told through the voice of the filmmaker. When David’s working-class parents decide to celebrate their 46th wedding anniversary without inviting his life partner this, All-American, rural family is dragged into the 21st century.
“Emotionally gripping!” Kim Westheimer, co-author of When the Drama Club is Not Enough: Lessons From the Safe Schools for Gay and Lesbian Students

Premiere
NO MORE LIES a portrait of a filmmaker by Sam Feder
This experimental documentary short viscerally depicts mainstream media’s definition of transfolks.

This evening includes the classic documentary OUT AT WORK by Kelly Anderson and Tami Gold
A cook at an Atlanta restaurant was fired for “failing to demonstrate normal heterosexual values.” She was shocked to discover
that in more than 40 American states it was legal to fire workers simply because of their sexual orientation. This film tells the
stories of three queer workers as they struggle for job security and benefits.
“A close-up of how deeply feelings against homosexuals can still reach and how vicious they can be.” The New York Times