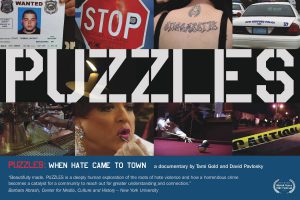 In the wake of the devastating attack at the LGBTQ nightclub PULSE in Orlando, Florida, killing 49 patrons, this documentary is particularly important as it can help frame the increase in hate violence directed at LGBTQ people.

PUZZLES When Hate Came to Town tells the story of a hate crime in a gay bar called Puzzles Lounge in New Bedford, MA when a teenager entered and brutally attacked its patrons. PUZZLES is particularly important as it asks hard questions and frames the connection between hate crimes and the extremist ideologies of Nazism and racism.