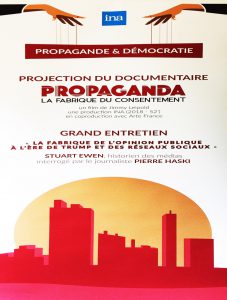 Prof. Stuart Ewen traveled to Paris for the broadcast premiere of Propaganda, la fabrique du consentement (Propaganda: The Manufacture of Consent), a new film by Arte Cinema based on his book, PR! A Social History of Spin. Prof. Ewen appears in the production, and he was interviewed on Radio France. The premiere was followed by an on stage discussion about propaganda in the Trump era with Pierre Haski, one of France’s most respected and well-known journalists.

The INA is organizing the Propaganda & Democracy evening on September 20, 2018 at 7:30 pm at the Cinema Etoile Saint-Germain-des-Prés with the screening of the documentary “Propaganda, La Fabrique du Consentement” followed by the Great Interview of Stuart Ewen, media historian interviewed by the journalist, Pierre Haski.

ABOUT STUART EWEN
Born in 1945, based in New York, Stuart Ewen is a historian, specialist in Public Relations and world reference of “media studies”, a discipline he helped to found in the United States. He is Distinguished Professor at Hunter College and CUNY (City University of New York). Stuart Ewen is the author of many books, including the famous PR! A Social History of Spin (1996), which inspired the movie “Propaganda, the manufacture of consent” and All Consuming Images: The Politics of Style in Contemporary Culture (1987). His book Captains of Consciousness: Advertising and the Social Roots of the Consumer Culture (1976) was translated into French under the title of Consciences under influence: Consciences sous influence : Publicité et genèse de la société de consommation (Aubier Paris, 1983) and again as La Société de l’indécence (Retour aux sources, 2014).

ABOUT PIERRE HASKI
Journalist and columnist at France Inter and L’Obs, President of Reporters Without Borders (RSF) since 2017. Business Specialist author of several books, the most recent of which was “The Fifties, and if the Cold War recommenced” (La Martinière, 2018).

ABOUT THE MOVIE “PROPAGANDA, THE MANUFACTURE OF CONSENT”
Directed by Jimmy Leipold, produced by INA and co-produced by Arte, the film “Propaganda, the manufacture of consent”, retraces, through the figure of its founder Edward Bernays (1891-1995), the birth and development of the Public Relations industry in the USA. In the light of archives and interviews of thinkers and academics such as Noam Chomsky and Stuart Ewen, the film decrypts methods of the “manufacture of consent”.

Listen to the Radio Interview. Translation below:

To talk about the fabric of Opinion in the era of Trump and social networks, Olivia Gesbert welcomes Stuart Ewen, media historian.
Nike advertisement featuring quarterback Colin Kaepernick (New York City, 2018)
How is consent made in a democracy? To speak about it, Stuart Ewen, historian of the media, specialist of the communication, the images and the mythologies of the society of consumption, close to the current situationist French.

He was the author in the early 1980s of Consciences under influence, republished in France under the title The Society of Indecency: Advertising and the genesis of the consumer society (The return to sources, 2018); Common decency, a concept dear to Orwell and the favored target of sappers and conscientious influencers.

He will talk tonight, Wednesday, September 20, 2018 at 19:30, with Pierre Haski at the Cinema Etoile Saint-Germain-des-Pres after the screening of the documentary Propaganda directed by Jimmy Leipold, as part of a great evening “Propaganda and Democracy “, organized by the INA.

I believe that the link between propaganda and democracy is something that has arisen out of necessity and not by democratic aspiration.
(Stuart Ewen)

Edward Bernays has developed strategies that could put aside the critical abilities of people (…) they would not see the difference between reason and emotion.
(Stuart Ewen)

One of Bernays’ beliefs is that people are stupid, (…) incapable of directing themselves.
(Stuart Ewen)