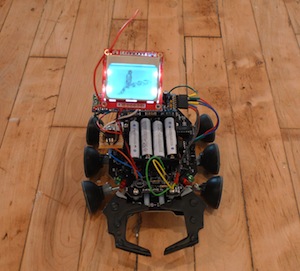 Undocumented Drone – a series of modified hobby robots that have been enhanced with an additional microcontroller, screen and radio module. Each robot presents a rotoscoped animation until it receives a twitter message with the tag “DREAMers”. Upon receiving the tweet, the animation freezes, the motors are activated and the message or tweet is displayed. The current drones are a beta test for a larger installation tentatively titled Sanctuary City that will be on display in the fall of 2012 at the New York Hall of Science.

The Undocumented Drones represent a near slave class within the United States that exists for cheap labor and does not have a voice – the undocumented laborers contributing to this country and primarily concerned with providing for the children and family. The twitter tag “DREAMers” alludes to the children of undocumented immigrants, brought to this country at a young age who have grown up in the United States, but may not have a right to higher education or employment. The DREAM Act was introduced a decade ago to create a pathway toward citizenship for undocumented youth. The DREAM Act has never been passed, however many of the young adults who would benefit from it have exposed themselves as undocumented and become activists; they are the DREAMers. Each bot juxtaposes the silent day laborer with the activist offspring.