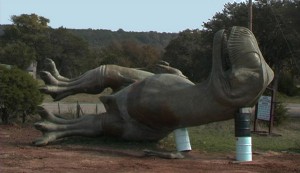 The Earth Is Young takes as its starting point a series of interviews conducted with Young Earth Creationists, who find evidence of a six-day, six-thousand-year old creation in their reading of the fossil and geological record. The film frames these encounters with depictions of the slow and patient work of mainstream paleontologists, and the strange, shimmering life in a drop of pond water, both of which point toward a world far older and more complex, if no less fantastic.

Bordering on a kind of science-fiction film, The Earth Is Young is an essay about the nature of science, and about the tools, both physical and ideological, with which one builds a model of the world.