IMA student Alex Mallis who worked as a cinematographer and associate producer over the last few years on the film Welcome to Pine Hill took top jury awards at Slamdance, Nashville, Atlanta, and Sarasota. The film will be having its NYC theatrical premiere this Friday at IFC Center.

Synopsis of the film, which A.O. Scott described as “… motivated throughout by a humane and determined curiosity.. a small film devoted to a very big idea.” 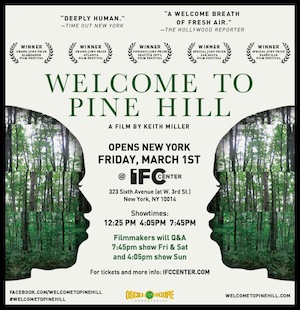 WELCOME TO PINE HILL is an extension of Keith Miller’s earlier short film PRINCE/WILLIAM about an unexpected encounter surrounding a lost dog. Blurring the line between documentary and fiction, PINE HILL follows that short’s protagonist Shannon, a reformed drug dealer who is now an insurance claims adjuster, in the days following a grim medical diagnosis. Shannon, portrayed in an extraordinarily intimate performance by first time actor Shannon Harper, sets out to make peace with those around him and in turn find his own peace beyond the cacophony of New York City.