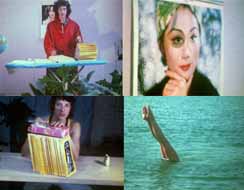 11 thru 12, and Flourescent Azalea, two super 8mm films from 1977, have been preserved by the National Film Preservation Foundation and the Fales Library & Special Collections (NYU) with BB Optics, Colorlab, and Trackwise.

11 thru 12 is sometimes spelled 11 through 12 or 11-12.
It uses the structure of the I Ching, objects in nature or commerce, and words to have both the measuring mind and a sense of the infinite.