IMA alum Nathan Fitch is the director, cinematographer and producer of Island Soldier – A documentary film about Micronesian citizens serving in the U.S. military, and the future of a small island nation. IMA alum Fivel Rothberg is producer on the film. 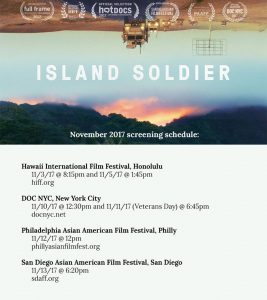 Island Soldier follows the personal stories of Micronesian soldiers serving in the U.S. military, accompanying them from the most remote islands in the Pacific to the front lines of war in Afghanistan. The film humanizes the repercussions of America’s foreign wars, and the changing of a small island nation caught in tide of international politics and on the brink of economic collapse.
posted on October 31, 2017