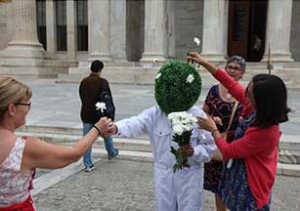 After working for several months in Europe and Latin America, IMA alum Hector Canonge returned to New York City to continue with his artistic projects and launch new initiatives this Fall. Starting in September, the artist will be working on the implementation of “TALKaCTIVE,” a monthly conversation series about performance hosted at the Queens Museum. In October, Canonge will host “CONVIVIR,” an international arts residency program in his new space in Jackson Heights, Queens. For November, he brings back to the city “ITINERANT,” the annual festival for Live Action Art to take place in the five boroughs.