Marty Lucas has just been funded to produce soap operas in Malawi with STORY WORKSHOP focusing on gender violence (http://storyworkshop.org). In 2008 Marty first worked with Story Workshop – one of the main media producers for Malawi, a country of 14 million in Southern Africa. Story Workshop has been producing radio shows on social issues since 1998. These shows have become the most listened to programming in the country. When Marty joined them two years ago it was to create a documentary video unit to produce a media series about food security, irrigation, grain storage, and composting practices.

Malawi has very little electricity, little television, therefore these videos are shown as part of multi-media events, on a bed sheet with a generator-driven projector. This project has just received funding from several European donors, so he will be going back this summer to produce the first episodes of a series based at a village health clinic that will explore a variety of social issues – sexual abuse, AIDS awareness and gender discrimination. Production stills from the pilot can be found on Marty’s
flickr site – they are wonderful – check them out: 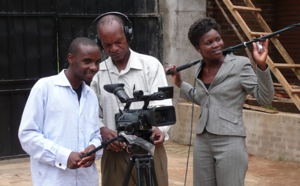