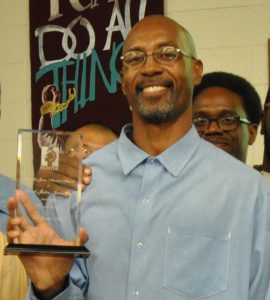 On September 29, 2016 San Quentin News held its first recognition ceremony in honor of Kevin Sawyer, winner of the Aronson Award for Community Journalism, and the other San Quentin News reporters. The ceremony was held inside San Quentin Prison.  It was their first opportunity to acknowledge those who work directly with the newspaper inside and outside of the prison, and the unsung individuals that have helped them reach the point they are at today.

The Hunter College Department of Film and Media Studies and the Aronson Awards are thrilled to have contributed to this celebration.