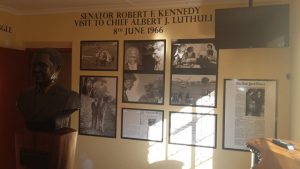 Prof. Larry Shore was commissioned to design the exhibit and make a special short video for the Albert Luthuli Museum in Groutville, Kwazulu/Natal, South Africa. The museum is a National Heritage Site 40 miles North of Durban. Last year the museum opened a special exhibit to commemorate Chief Luthuli’s meeting with Senator Robert Kennedy on June 8th, 1966. Chief Luthuli was the first African to win the Nobel Peace Prize. At the time of the visit he was the banned president of the African National Congress. The exhibit is about the meeting.

Here’s a video from the museum:

Congrats to IMA student Megan Rossman! She is the recipient of the Princess Grace Award – 2017 Graduate Film Scholarship.