IMA student Fernanda Faya short documentary One for the Road is being showcased as part of the Online Short Series of the San Francisco Jewish Festival website. The film, which was originally created in Prof. Kelly Anderson’s Documentary II class, looks back at the migration of Fernanda’s grandmother as a way to find traces of Faya’s own identity. The foreign yet intimate look at NYC and its inhabitants unfolds into a visual letter as she collects images of her new surroundings.

Prof. Véronique Bernard’s film Enter the Faun will appear on PBS World Channel’s America Reframed on December 12, at 9pm. The film documents a culmination of an intensive two-year collaboration between veteran choreographer Tamar Rogoff and Gregg Mozgala, an actor with cerebral palsy. Their creative exploration, at the intersection of science and art, led them to discover that his diagnosis and physical limitations were not necessarily fixed and immutable. 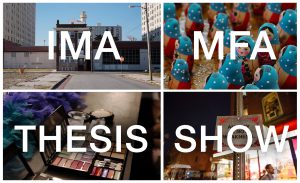