Prof. Kelly Anderson will be showing and discussing her film My Brooklyn in Bogotá, Colombia on Oct. 12 at the World Summit of Local and Regional Leaders. This is the 5th annual forum of the organization United Cities and Local Governments (UCLG), a global network representing more than 1,000 cities and regions in 142 countries. 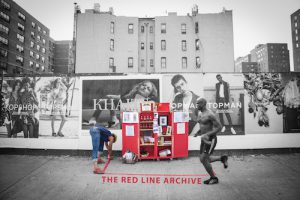 IMA alumna Walis Johnson’s project “The Red Line Archive” will be showing at Art in Odd Places Festival October 8-9th from 2:00 – 6:00 pm on East 14th Street between 1st Avenue and Avenue C. The Archive highlights the personal and political relationship to real estate of Walis’ family history in brownstone Brooklyn that is now the site of aggressive gentrification, and includes new additional material focused complex history of Stuyvesant Town which borders the north side of East 14th St.

IMA alumna Ozge Dogan’s thesis documentary “The Sacred” is now the part of the exhibit at the Ellis island Immigration Museum October 1, 2016 – January 9, 2017. The exhibit was launched a few years ago in Detroit.