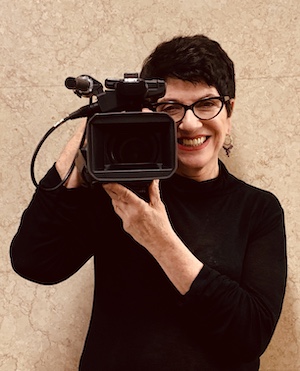 Tami Gold (Filmmaker, Artist & Educator) is a visual artist who began working in media in the early 1970’s in the Newsreel Film Collective of the anti-Vietnam War movement. In addition to painting, sculpture and writing, she is an award-winning documentary filmmaker. Most recently Tami directed (with Larry Shore, Producer/Director) RFK IN THE LAND OF APARTHEID: A Ripple of Hope (www.rfksafilm.org), a documentary about Robert Kennedy’s visit to South Africa in 1966 and the connection between the anti-apartheid struggle in South Africa and the Civil Rights Movement in the United States. In 2006, Tami produced and directed a video about the popular struggle in Oaxaca, Mexico, LAND RAIN AND FIRE (with Gerardo Renique), which aired internationally on Spanish language TV. She authored a companion article A RAINBOW IN THE MIDST OF A HURRICANE (Radical Teacher 2008). In 2004, Tami produced and directed EVERY MOTHER’S SON (with Kelly Anderson) winner of the Tribeca Film Festival Audience Award and broadcast on the PBS series POV. This film profiles three mothers whose son’s were killed by the NYPD and unexpectedly find themselves united to seek justice and transform their grief into an opportunity for profound social change. In 2000, Tami produced and directed MAKING A KILLING (with Kelly Anderson), a documentary that addresses the marketing practices of the tobacco industry in the developing world. MAKING A KILLING premiered at the Slamdance Film Festival, was screened for delegates at the World Health Organization and aired on television in Nigeria, Serbia, Lagos and Vietnam. Tami has produced and directed over 20 films including: ANOTHER BROTHER, the story of an African American Vietnam Veteran which aired on PBS; JUGGLING GENDER: Politics, Sex and Identity, which aired on Reel New York and screened at the New York Film Festival’s video series; OUT AT WORK: Lesbians and Gay men on the Job, which screened at the Sundance Film Festival and was shown on HBO and authored a companion article MAKING OUT AT WORK (Social Text – Routledge); SIGNED SEALED AND DELIVERED, Labor Struggle in the Post Office, aired on PBS and LOOKING FOR LOVE: Teenage Mothers among others. She is the recipient of a Rockefeller Fellowship, Guggenheim Fellowship, Video Arts Fellowships from the New Jersey and New York State Councils on the Arts, the Excellence in the Arts Award from the Manhattan Borough President, The American Film Institutes Independent Filmmakers Production Fellowship. Her work has screened at the Museum of Modern Art, the Whiney Museum, The Chicago Arts Institute, The Kennedy Center, The American Film Institute, The British Film Institute, The Public Theatre among others. Tami is a Professor at Hunter College and the Hunter Chapter Chair of the PSC CUNY.